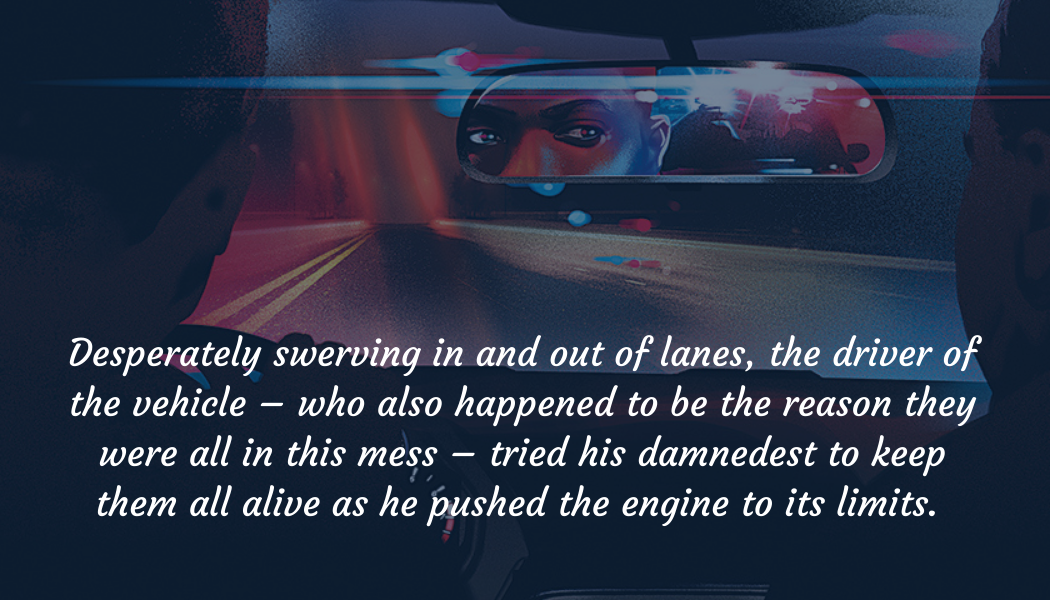 A Race Against The Clock

The exhaust note of the Maserati Quattroporte sang through the streets of Scottsdale in the dead of the night. They recklessly raced through town with no regard for pedestrians, scooters, bicycles, or other obstacles in their path. Time was running out. “We’re not going to make it man, we’re not going to fucking make it.” This sentiment was shared amongst the group.

Desperately swerving in and out of lanes, the driver of the vehicle – who also happened to be the reason they were all in this mess – tried his damnedest to keep them all alive as he pushed the engine to its limits. The countless storefronts and bars that they passed became a blur, as had the events of the past hour in the mind of the driver.

How had he managed to get himself and his friends into such a predicament? What was he going to do now? Phones continued to vibrate and ring but all were ignored. Their minds all raced with thoughts of their individual regrets, and of past times when their world was still intact and things were still manageable. With each incoming call or message came the illumination of a phone screen and a reminder of the time, or rather, what little time they had left.

“We’re almost there boys, it’s all gonna work out.” This wasn’t the case at all and he knew it, but being the driver, he felt a sense of responsibility for the mindset of his crew.

After another several streets came and went, the driver thought he heard one of the lads in the backseat began to weep quietly to himself. No one dared acknowledge this, however, as they were all struggling to come to terms with what they were feeling as well. What was probably only a few minutes felt like forever and they were all mentally exhausted because of it.

Eventually, they arrived in the general vicinity of their destination and they all collectively let out weak-hearted sighs of relief. This long-awaited moment of peace was cut short, however, by the blinding blue lights that filled the inside of the car, projected from the vehicle behind them. No words were necessary as they all knew immediately that they were now officially fucked, and what little hope that had remained was now gone. How could so much bad luck befall them at once?

The driver thought of his girl and what might become of them now. Surely, she would go off with some other guy in his absence, and he would spend the remainder of his days alone with only the memory of this failed night. And of the rest of the boys? Well, they would likely recover in time, but for now, they could expect nothing less than hell for the foreseeable future. And for what? He didn’t even know anymore.

The driver rolled down his window as the officer approached. With both hands on the steering wheel, he tried his best to conceal his anguish, which he figured could easily be misconstrued as some form of intoxication. “Howdy officer, how’s your night going?”

The cop glared at him, “License, insurance, and registration please.” The driver provided the required documents and the officer silently stared into his eyes for several seconds before returning to his squad car. Two minutes later, another police SUV pulled up and two additional officers began to hover around the vehicle. The original cop handed back the documents upon his return.  “We’ve got a problem.” The driver’s heart skipped a beat and he briefly forgot how to breathe. “Your insurance has expired and your license is suspended.”

Fuck, they’d reached the end of the road. He assumed that the next request out of the mouth of the young police officer would have something to do with him reciting the alphabet backwards, or walking a line, or blowing into some device. Having reached his personal stress limit, he was ready to confess to whatever just to get it over with. Fortunately for himself and the other occupants of the car, a message came into the radios of all three officers at once. He couldn’t make out what was said on the call, but he did notice them all look at each other disappointedly and then at him.

Could it be? A sudden stroke of luck after a seemingly hopeless journey through the night? The officer returned to the window and confirmed what the driver was desperately praying for, and so they were back at it. The short remainder of their journey was draped in a tense silence. The driver navigated the streets with caution and when they pulled into the first available parking spot, they paused and braced themselves before exiting the vehicle and making their way to the door. Everything that they had gone through over the past few hours had all led to this point and they all realized that the next few minutes could determine the outcome of their next few years. The time had finally come; and together, they entered the unknown.