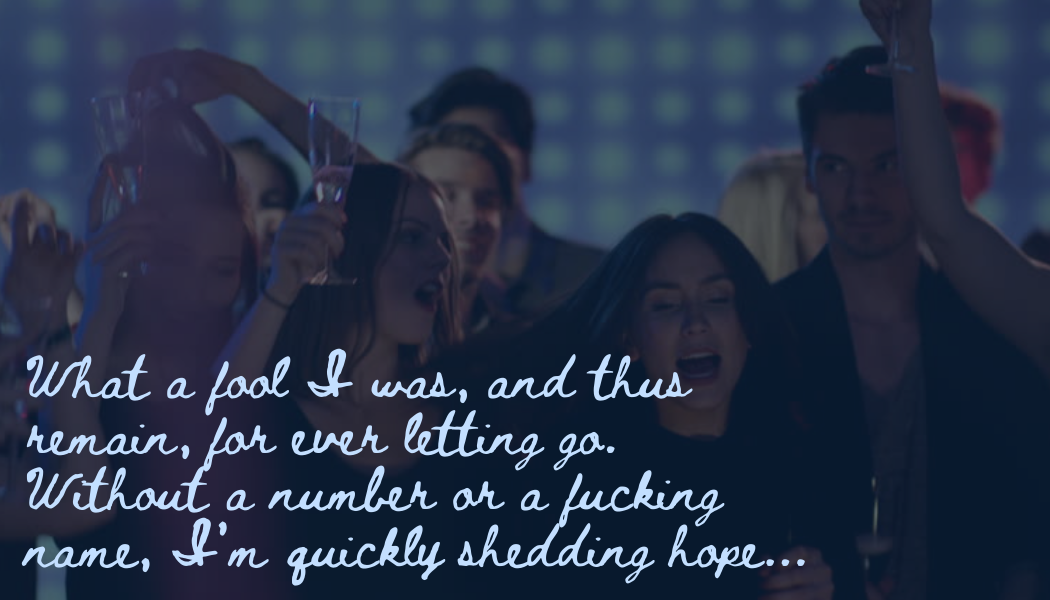 They were all fixated on the goddess as she strolled through the venue. To whom had she come there to see? How long might this mystery continue?

Every head turned towards her and every mind thought the same. How glorious it would be to meet and whisk her away.

I had found what I was searching for when we connected eyes. And as she walked across the crowded floor, I began to feel alive.

As she approached, I felt the weight of the attention she had gained. We talked forever, never even asking for each other’s names.

For in the moment, we were safe. We were detached from all the world. I had the envy of all the men, she had jealousy from the girls.

And together, we had proof that two could meet and hit it off, without the early awkward stage that makes conversations soft.

“Take my hand,” she said as friends of hers attempted to depart, to the floor. I felt the need to take a break before we start.

What a move to make without a plan to regroup in the night. In a time, when every man around, has her in his sights.

What a fool I was, and thus remain, for ever letting go. Without a number or a fucking name, I’m quickly shedding hope.

Shifting gears from confident to fear, I can see the tragic end. As her friends create a wall between me and all the men.

And then there’s her, overwhelmed, she’s like gold beneath the ground. And every man knows that his only chance to dig for her is now.

And there I stand, feeling empty, feeling robbed of what could be, my greatest find. But then I found, the only burglar was me.

With this knowledge, I resolved to find her, enough time had been spent. So I finished off my glass of bourbon, and after her I went.

Through the crowd, through the tangled jungle of drunken, dancing figures, was my girl, with a guy, as her friends were taking pictures.

What is this? I’m convinced that I’m mistaken or insane. Not a song has passed before he grabs her hand goes away.

I’m defeated, void of energy, and tired of the game. I want to yell, “You fucking whore!” but I know she is not to blame.

There’s only me, metaphorically, but also in the flesh. And in my mind, I find it hard to think of anything but stress.

So I drink to women found and lost in bars on nights like this. May our next encounter stick, should we ever meet again.