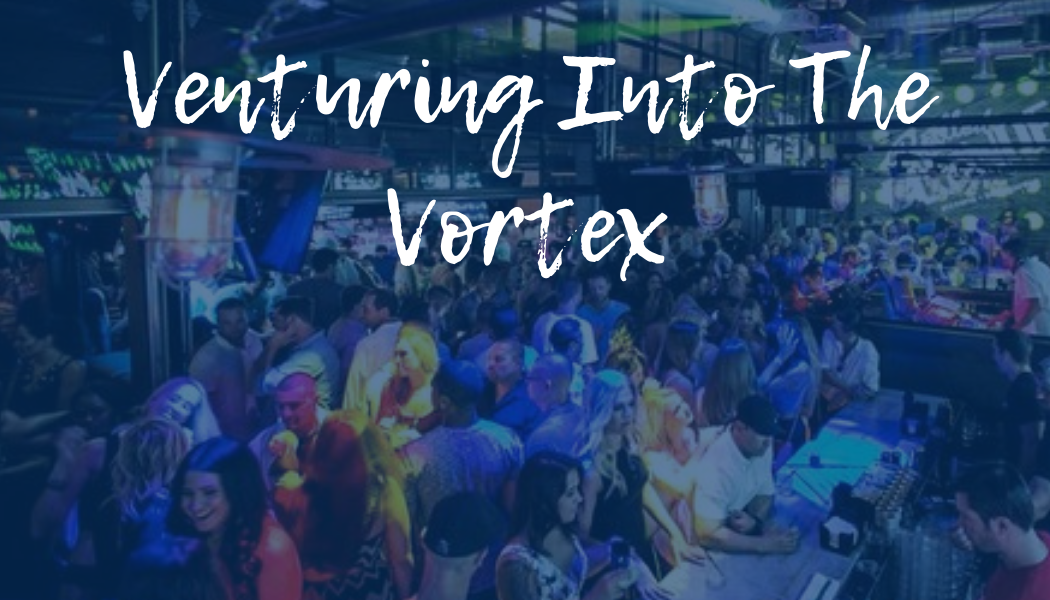 Venturing Into The Vortex

She could feel her skin tingling and her heartbeat was in sync with the blaring music at the trendy new Old Town nightclub. She had spent more time than usual applying makeup and styling her hair that night, and she did so while gradually sipping her way through a full bottle of cheap wine. She had taken too much time to prepare and had probably over consumed making her late to meet with her friends leaving her to enter the club alone.

Within seconds of entering, she remembered why she hated this scene. Everyone in attendance seemed to fall into one of a few categories. They were either rich (or rich-looking) sons and daughters of Scottsdale millionaires, groups of drunken clueless tourists, or they were uncomfortable outcasts. She fell into the latter category. She pushed her way through the club and towards the bar as she wondered why anyone would ever willingly subject themselves to this. Inebriated bodies bounced off of one another with each disturbance from a passing person in need of a restroom or more alcohol. Chaos coursed through the room over a soundtrack of loud pop and electronic music. Everyone was moving and in search of something, but few would ever truly find what they were looking for.

She ordered a vodka water with lemon and took refuge at the bar for several moments before venturing back out into the wild. She tried her best to avoid eye contact with anyone while also looking around at every group of faces for something familiar. She was taken aback at the realization that she had been caught staring at a guy standing opposite her at the bar. His look was one of admiration and intrigue. He shot her a warm, genuine smile and she followed suit. He motioned for her to come to him which she would normally see as some sort of masculine display of dominance over women, but for some reason, she couldn’t resist. Her right hand clutched a vodka drink and the strap of a small purse while her left hand hung awkwardly beside her.

As she made her way through the thick sea of wasted patrons, she never lost sight of the handsome stranger across the way that seemed to guide and draw her in with his eyes. She could feel her heartbeat quicken as she entered his general space and she tried her best to feign confidence.

“Hello gorgeous,” he started. “So, are you early, or is he late?” She remained silent and confused but was able to keep her composure. He called her bluff and smirked. “Surely you’re not here alone, and judging by your over-the-top, yet stunning appearance, I take it you are here to meet someone.”

She didn’t know whether to be flattered or offended but she felt the urge to play along. “He’s late,” she said brazenly. “Well then, his loss.” His response came with a charming smile and a wink. The bartender then presented them with two shots of what appeared to be tequila. He took them both and handed one to the girl.

She felt herself smile and blush but her excitement turned to horror and then embarrassment as she focused on the approaching group of girls that she initially ventured out to see. She had only seconds left.

“I was actually dragged here by my friends to this sweaty pool of drunken idiots, no offense.”

Just then, three loud and reckless drunk girls in short skirts and high heels stumbled over enthusiastically. She looked helplessly at the guy with whom she was about clink glasses and she sensed that this night would end in disaster as she assumed most nights do on this scene. They realized that they would likely not cross paths again and reached out to each other with shot glasses in hand for one final shared moment, but the obnoxious trio managed to knock the tequila out of her grasp. The girl’s friends dragged her away and they both shuddered as the glass shattered on the sticky bar floor.